Remakes are a mixed bag.  Some are quite good in reimagining the song in a whole new way, while others are, well, terrible.  And then, of course, there are the note-for-note remakes which are, in most cases, completely unnecessary.  One of the great, and most forgotten, remakes came out in the mid-80s and sounded completely different from the disco song it remade.  You’ll probably remember the original disco version of “Funkytown”, but do you remember the remake by Pseudo Echo? 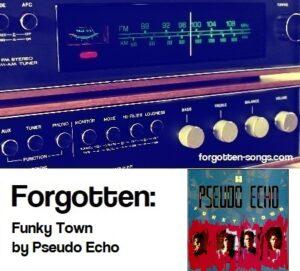 Before we can talk about the remake, let’s talk a little about the original.  Released as the disco era was quickly coming to an end in the musically confused year of 1980, “Funkytown” spent four weeks at #1 in May-June and turned out to be the only real hit for Lipps Inc.

There isn’t much mystery to the lyrics of this one.  (For that matter, there aren’t really that many lyrics to begin with.)  The singer (originally Cynthia Johnson) expresses her desire for a location that will “keep [her] moving”.  To go a little deeper (if that’s possible with these lyrics), the song was about the band’s hope to leave the Minneapolis scene in favor of New York.  I guess they thought that was better.

Aside: I don’t think I need to state it, but the original version by Lipps Inc. has not been forgotten by a lot of American radio.

A couple of years after Lipps Inc. had its only top 40 hit with “Funkytown”, the band Pseudo Echo was formed in Australia.  Per the group’s official bio, it began as a collaboration of school friends Brian Canham and Pierre Gigliotti, with others joining later.

For reasons not explained pretty much anywhere online (at this writing), Pseudo Echo remade “Funkytown” in 1986.  Changing the title from one word to two*, Pseudo Echo gave the song much more of a pop-rock feel.  Their version was an immediate success in the band’s native Australia, spending close to two months atop the charts there.

Apparently recording this version was a one-shot sort of thing, since the group ended up re-releasing their album from a year earlier, Love an Adventure, with “Funky Town” as an additional track. 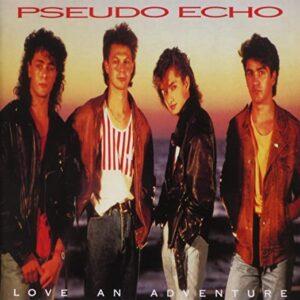 It took a few months from the peak of “Funky Town” at #1 on the Australian chart before it broke onto the American charts.

As Pseudo Echo’s official bio indicates, the group’s sound had trended toward a rock/metal sound, which, it appeared, “had alienated a good portion of their established fanbase.”  Chart success was not to be for future releases, with only two more singles charting in their native Australia and no further hits making Billboard’s Hot 100 at all.  Two more albums came after the success of “Funky Town”, but by 1990, Pseudo Echo had disbanded.

In 1998, however, the group’s co-founders reunited, with some other band members, and Pseudo Echo has continued since then (with Mr. Gigliotti leaving in 2012).  The group continues to record (occasionally) and tour around Australia.

Just how forgotten is this song?

More importantly:  how many times have I heard it on the radio since, say, late 1987?  Zero.

* The single clearly shows it as two words, but the album shows it as one.
** Which puts it two ahead of some of the other songs spotlighted on this page, but 403 less than the Lipps Inc. version.
Note: this post contains affiliate links. View my affiliate link disclaimer here.