Given all the chart successes enjoyed by Daryl Hall and John Oates in the mid to late 1970s and, especially, the early 80s, it’s not surprising that some of their songs from outside that period have fallen by the wayside.  It’s possible, but certainly not proven, that their longer than usual hiatus after 1984’s Big Bam Boom caused them to be somewhat forgotten, even back then.  But regardless, when the duo returned to the studio in the late 1980s, their songs, while fairly successful at the time, did not seem to have much of any staying power on American radio.  Such was the case with “Everything Your Heart Desires”.

With that said, it is definitely true that Mssrs. Hall and Oates certainly deserved a break after 12 years of recording and touring.  It allowed them to work on other projects and/or kick back for a bit.  (Daryl Hall, for instance, released what would be his biggest solo hit by far during this break.)

Having completed their obligations under their previous contract with RCA Records, the duo were signed to RCA’s sister label (at the time), Arista, by Tommy Mottola, who had first discovered the duo while he was a local rep for Chappell Music.  And so, with their new (sort of) label, the two were back in the studio soon afterward to record what would be their 13th album, Ooh Yeah!  Being a true product of its time (1988, to be specific), the album features cover picturing both men with hair that some of the girls in my school at the time would probably have killed to have.*  (Ooh, yeah, that was a lot of hair product they used in 1988.) 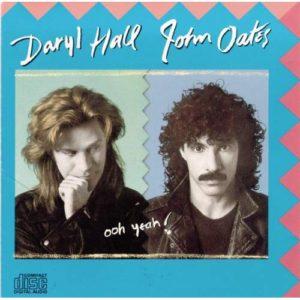 The lead single from Ooh Yeah!, “Everything Your Heart Desires” was a mid-tempo track** about a lover dreaming that the grass might be greener somewhere else, while her would-be spurned partner tries to convince her that she’s better off staying with him.  So, pretty much, it’s describing probably about a third to a half of all relationships in America right now.

“Everything Your Heart Desires” debuted on Billboard’s Hot 100 all the way up at #46 for the week ending April 16, 1988 (chart).  Eight weeks later, it peaked at #3 (chart), kept out of the top two spots by two of the biggest pop music names of 1988, George Michael and Rick Astley.  It lasted 16 weeks in the Hot 100, just barely hanging on at #100 in its final week.  Its performance was enough for Billboard to rank “Everything Your Heart Desires” at #72 in their 1988 year-end chart (shown here per – sorry – Wikipedia).

Following the lead single’s success, three other singles were released from Ooh Yeah!  The next two singles charted fairly low on the top 40, while the third missed the Hot 100 entirely.  Their next album, Change of Season, yielded one more top 40 hit, which would turn out to be the duo’s last.

Of course, Daryl Hall and John Oates have continued to record and tour, although their albums have been much less frequent in recent years.  Their songs continue to get airplay (minus, among many others, “Everything Your Heart Desires”), though, as stated previously on this site, they don’t necessarily get the respect their decades of success should command.

* Minus the well-known mustache that John Oates sported throughout the 80s, of course.
** I’d probably say it was a little too much toward light rock to be called yacht rock, but then, I’m not the arbiter of that.