If one were to make an objective list of the most successful duos in American music during the pop era by sales and chart successes, one would have to include Daryl Hall and John Oates.  However, if I were to make a list of the most disrespected duos in America music in the pop era, I would also include Daryl Hall and John Oates.  Add to that the fact that they did have so many chart smashes, and it’s easy to see how a single that was not so successful could be forgotten so totally.  And that’s exactly the fate of the duo’s 1981 single “Your Imagination”.

Daryl Hall perhaps put it best when he described his path to success as “being in the right place at the right time”.  While in college, he met up with John Oates, and the two of them started playing music together, which led to a contract with Atlantic Records in the early 1970s.

While the Atlantic Records era yielded one bona fide hit, “She’s Gone”, that single wasn’t actually a hit until after Mssrs. Hall and Oates had departed for RCA Records in 1975 and charted for the first time with “Sara Smile”.  Then, Atlantic took “She’s Gone” and re-released it, taking advantage of the newfound recognition of the duo.  Not long after that, they scored their first number one hit with the 1976 track “Rich Girl”, and the future was looking quite bright.

And then, as sometimes happen, came the lean years.  Sure, the albums continued to chart well, but only two singles hit the top 20 in the following 3½ years.  Tastes are fickle, but then, those were the peak disco years, and disco wasn’t really the sound Daryl Hall and John Oates went for.

The early 80s, and bigger successes

1980, however, brought some definite positive changes for the two of them.  They decided to produce their next album, Voices, themselves, and very quickly, that album produced several hits, including a second number one hit, “Kiss On My List”.

Not wanting to rest on their laurels, the duo was already back in the studio while “Kiss On My List” was topping the charts.  The resulting album, Private Eyes, while not the best selling album Daryl Hall and John Oates released, was quite successful, going double platinum and spawning four top 40 singles, two of which went to number one. 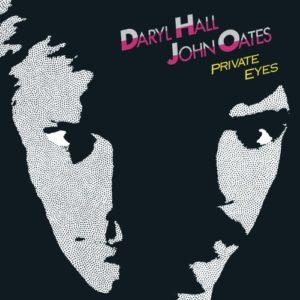 The fourth single from Private Eyes, “Your Imagination”, was a Hall-penned track about someone whose lover believes them not to be faithful.  Granted, the lyric “just one oversight, and know that didn’t last too long” would probably not help their lover’s active imagination.  I’m not sure the relationship described by this song is going to last.

Oh, well, it had a good beat, and you could dance to it.  (And it got a fair amount of airplay on MTV, which in 1982 was still desperate for music videos.*)

“Your Imagination” did not experience the rapid rise up the charts that the first three singles had had.  While those singles all reached the top 40 by either their second or third week on Billboard’s Hot 100, “Your Imagination”, despite a strong debut at #69 for the week ending June 19, 1982 (chart | magazine),  crept up the charts quite slowly, requiring six weeks just to reach the top 40 and peaking at #33 in its ninth week, the week ending August 14 (chart | magazine).  It remained at #33 for two weeks, fell all the way to #92 the next week, and was gone.  As might be expected, “Your Imagination” did not follow its three predecessors onto the 1982 year-end chart.

Of course, the career of Daryl Hall and John Oates continued to be quite successful after Private Eyes.  H2O, released just a couple of months after “Your Imagination” hit its peak position, was the duo’s best-selling album, and their albums and singles continued to chart throughout the 1980s.

But are they really disrespected?  By some, definitely yes.  Take, for example, Rolling Stone, which in a list of (supposedly) the 20 greatest duos of all time, inexplicably left Daryl Hall and John Oates off the list entirely, as did some site called U Discover Music in its list of the top 11 greatest vocal duos of all time.  I guess they hadn’t discovered everything.

While I’m sure Mssrs. Hall and Oates are not at all concerned about the continued disrespect by so-called music experts who ought to know better, it bothers me that there are generations of people not reading about or hearing nearly enough music from Daryl Hall and John Oates.  Even a song like “Your Imagination” deserves airplay, if for no other reason than to illustrate how prolific and consistent the two of them remained for more than a decade.

* Nowadays, of course, MTV is known for pretty much not playing music videos at all.