Just after Regina’s one big hit, “Baby Love”, made its way up both the Hot 100 and Hot Dance/Disco charts in 1986, Stacey Swain, better known as Stacey Q, followed with her one big hit, “Two of Hearts”, the debut single from her first album for Atlantic Records, Better Than Heaven.

According to her non-defunct official website (archived here), Stacey Swain started out as a dancer, using her abilities to work at places from Disneyland (where she started working at age 11) to the Ringling Brothers Barnum & Bailey Circus.  In 1981, she met up with producer Jon St. James, who formed the synthpop band Q, where Ms. Swain became the lead singer.  It was Mr. St. James who gave her the name Stacey Q.

Stacey Q became a solo artist when Q (which, by then, was named SSQ) saw its label, EMI America, disappear.  Her former bandmates, however, did back her up on Better Than Heaven, produced by Mr. St. James. 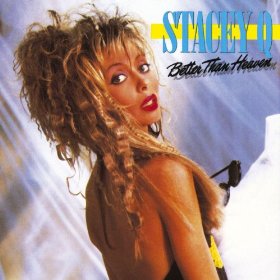 As per this interview (archived here), Ms. Swain did not originally want to record “Two of Hearts”, as it was someone else’s* song first.  Jon St. James had to talk her into recording the song, as she explains:

Jon became aware of the East L.A. dance scene which I was promptly assigned to. He brought the song to me to record. I told Jon I’d rather jump from the studio balcony than sing someone else’s song. The less said the better. Jon just said to trust him, but he had to pretty much make me sing it.

Interestingly, Ms. Swain’s voice sounds quite breathy in this song and its follow-up single, but live recordings of “Two of Hearts” (there can usually be some found from back then on YouTube) show that she could really belt it out when she wanted.

Stacey Q followed “Two of Hearts” up with “We Connect”, which also hit the Top 40, before she disappeared from the Top 40 entirely (though two other singles did hit the Hot 100 later in the 80s). These days, you might still catch her performing; she also maintains a public Facebook page, for those who want to drop her a line.

* Sue Gatlin, specifically. Apparently a pop singer herself, Ms. Gatlin does not even rate her own Wikipedia article.
** From the same interview as above: Cinnamon ended up dating a character played by a young actor named George Clooney.