In late 1985, the Chicago Bears were dominating the NFL, cruising to a 15-1 record.  It was widely expected that they would continue to win easily all the way through the Super Bowl.

What was not widely expected is that they would release a hit song along the way. 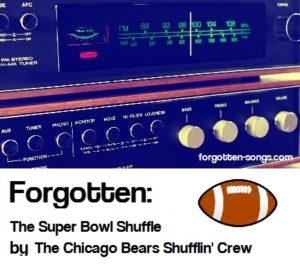 Whose Idea Was This, Anyway?

The idea of a sports team recording a song wasn’t new–for example, the San Francisco 49ers had, on their way to winning Super Bowl XIX a year earlier, recorded a song called, so originally, “We’re the 49ers”.  That song did not make a dent on the charts, however.

But regardless of whether the Bears were aware of the 49ers’ effort a year earlier, they were convinced to release a rap song and video entitled “The Super Bowl Shuffle” during the regular season.  While Wikipedia* states that the idea came from a “die-hard Bears fan” named Randy Weigand, this site featuring an oral history of the song seems to point more toward Richard “Dick” Meyer, who produced the song and owned Red Label Records, which released the single.  Most histories of the song agree that the idea for the title and lyrics came from the “Kingfish Shuffle”, which had its origins on “Amos & Andy” many years earlier.  These histories also seem to agree that the idea was first pitched to Bears receiver Willie Gault, who managed to get most of the rest of the team onboard.** 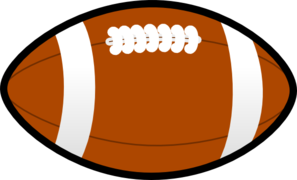 (This is about the only thing related to this song that I can upload without exposing myself to liability.  Free clip art courtesy clker.com.)

The Bears shot a video for the song, ironically, the day after their only loss of the 1985 season.  If you’ve seen the video, you know Jim McMahon and Walter Payton were unavailable that morning and were added in via the most up-to-date special effects available in 1985 (namely, a green screen). Steve Fuller, the backup QB that season, can be seen in the video with a broken foot, which typically is not good for dance moves (or for running like lightning, as Mr. Fuller purported to do in the song’s lyrics).

A week after that, “The Super Bowl Shuffle” was released.  It debuted on Billboard’s Hot 100 at #92 for the week ending January 11, 1986.  Four weeks later (after Chicago had already won Super Bowl XX), the song peaked at #41.  In total, the song spent nine weeks on the Hot 100.  Per Rick Geiser of sportssongs.com (as quoted on grantland.com’s oral history of the song), the song should have charted much higher than its peak of #41:

“The Super Bowl Shuffle” record should have been number one, or a Top 10 song. Based on sales, it did go gold extremely quickly. But because most radio stations didn’t officially add it to the playlists they reported to Billboard, it only got to number 41. It’s probably one of the only songs to go gold but never make it into the Top 10.

As stated in the first verse of the song by Walter Payton, the aim in recording “The Super Bowl Shuffle” was to “feed the needy”.  Specifically, this was done via a six-figure donation to the Chicago Community Trust.

What happened after The Super Bowl Shuffle?

Since then, there has been some outcry from the players about whether enough of the proceeds were donated to CCT, as well as whether they themselves were compensated fairly for participating.  Just last year, six former Bears filed a lawsuit against Julia Meyer (Dick Meyer’s widow–she also portrayed the referee in the video), who currently holds the rights to the song, and Renaissance Marketing Corporation, her agent for licensing the song.  The aim in the suit was to prevent non-charitable uses of the song and video.  At the time this blog entry was written, the suit was still pending.

Many football fans might remember more recently an ad for Boost Mobile featuring many of the same players who appeared in the original video.  However, as Willie Gault says here, he “was a little disappointed with the experience”:

I think they had an opportunity to make that really great and I tried to come up with some ideas for them. I thought we could redo “The Super Bowl Shuffle” in a great way and I gave them ideas and they thought they were OK, but wanted to go another way. It became a comedy about McMahon and Ditka as opposed to being about the team.

Why Isn’t There A Clip On This Page?

It should be noted that Julia Meyer is very diligent in tracking down people who use images, audio, or video of “The Super Bowl Shuffle” without permission, and since this blog is more of a labor of love than anything else, I don’t really have any desire to deal with litigation.  Thus, unfortunately, I am unable to bring you a clip of the song.  However, Amazon (via a third-party seller) is selling new copies of the video, which I assume to be licensed, and so you can purchase the song here:

* And multiple other sites which borrowed extensively from Wikipedia.
** Bears defensive end Dan Hampton thought the song was a little arrogant and opted out.
Note: this post contains affiliate links. View my affiliate link disclaimer here.