I’ll readily admit that some of what inspires me to call out specific songs is the appearance of the artist (or a member of the group) in the news.  Once already this year, unfortunately, I have done so because of the news of a divorce after a long marriage.  Sadly, this is the case a second time, this time the dissolution of the 25-year marriage of Richard Marx (who has been mentioned on this blog before for reasons not related to his own hit music) and actress/singer Cynthia Rhodes, of the group Animotion. 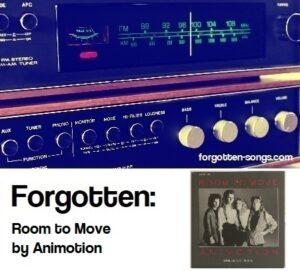 The shakeup of Animotion

Animotion was, and is, best known for 1984’s “Obsession”, which hit #6 and is still heard on radio today. In about the same timeframe (around 1988 or so), Astrid Plane (whose voice was heard on “Obsession”) and two others departed the group.*   Cynthia Rhodes joined the group during the recording of the group’s third album, replacing Ms. Plane.  With all the upheaval, in effect, Animotion had become almost a totally different group from the one that had formed in 1983.

Perhaps because the group was so different when this third album was released in 1989, the album was self-titled, just as Animotion’s first album had been.  To help distinguish the two eponymous albums, the 1989 album was informally known by the title of its first single (but only informally; the title of the single does not appear on the album cover, as seen below). 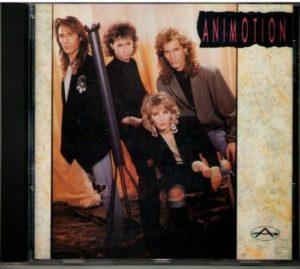 The first single, “Room to Move” (a remake of a song recorded a year earlier by another 80s group, Climie Fisher), received plenty of airplay in early 1989 and spent a healthy 18 weeks on Billboard’s Hot 100.  (Per the always-reliable Wikipedia, the song was helped by an appearance on the soundtrack for the movie My Stepmother Is an Alien.)

After “Room to Move”, one further single, “Calling It Love”, was released from Animotion; it only made it to #53.  The group broke up soon afterward.

As I said earlier, the only song from Animotion that seems to get any airplay whatsoever now is “Obsession”.  The last time I recall hearing “Room to Move” on the radio was, in fact, during its original chart run.  In my opinion, it’s worth giving this song a few more spins.

* Some of these departures, such as Ms. Plane’s, were apparently not voluntary.
Note: this post contains affiliate links. View my affiliate link disclaimer here.