On March 10, we lost yet another pop singer, as Joni Sledge, the second oldest Sledge sister, passed away at the age of 60 from causes that are, as of two weeks ago, unknown.  While it was youngest sister Kathy who sang lead on most of the Sister Sledge songs that people remember, Joni sang lead on a few as well.

Sister Sledge, of course, became famous almost overnight after their 1979 single “We Are Family” ended up being the song of the summer.*  Their album of the same name, produced by Chic’s Bernard Edwards and Nile Rodgers, soared to #3 and went platinum.  (While it did not chart, the second track on the album, “Lost in Music”, featured lead vocals by Joni.)

With that kind of success, it’s no surprise that the same team worked together on Sister Sledge’s next album, Love Somebody Today. 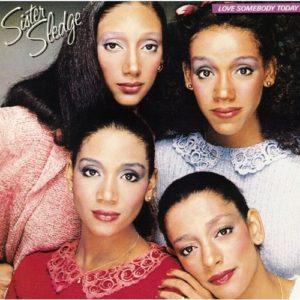 Of course, in between the release of We Are Family in January 1979 and Love Somebody Today in March 1980, the top 40 landscape had changed significantly. The first single from Love Somebody Today, “Got to Love Somebody” (which was released before the album was), made a modest dent on the charts, peaking at #64 in early 1980.

Sister Sledge never again reached the heights that the group had attained with We Are Family.  The Chic sound was losing popularity (though there was just enough magic in that sound to give Diana Ross her best-selling studio album ever), and, perhaps sensing a change in the prevailing winds of Top 40 radio, Sister Sledge moved on from Nile Rodgers and Bernard Edwards for their next album, All American Girls, which produced two tracks which hit the bottom half of the Hot 100.  The group did reach the Top 40 one last time in the US in 1982 with their version of “My Guy”, and while their final Hot 100 hit, “Frankie”, did not fare well in the US, it did spend four weeks at #1 in the UK and Ireland.

In 1989, Kathy Sledge left the group for a solo career.  Unfortunately, this led to some hurt feelings that have lasted a long time.  Even in the last few years, per her website, Kathy’s sisters have taken her to court regarding the use of the name “Sister Sledge”.  So with all that said, sources aren’t clear as to how much the Sledge sisters were speaking with Joni died, but Kathy did post a nice tribute on Twitter:

And, of course, the other Sledge sisters posted some nice words about Joni as well.

Joni Sledge will be missed.  It would be a nice tribute to her, though, if some of her songs, such as “Reach Your Peak”, were to make their way onto a few stations’ playlists again.

*At least, it was the song of the summer to the author, who remembers, as a five-year-old, hearing that song more than any other song. The reader should be reminded that, due to the author not being in control of the radio in the car, the radio was generally on middle-of-the-road stations, rather than Top 40.  The author would also like to point out that the MP3 linked is the original album track.  For whatever reason, the 7″ single of “We Are Family” and almost every other version available now is pitched a half-tone higher.

**At the time of this writing, Billboard.com’s archive of Bubbling Under Hot 100 charts only goes back to December 1992.  The only up-and-running source for that chart position is the not-a-favorite-of-this-blog Wikipedia.

***Billboard.com’s archive of Hot R&B/Hip-Hop Songs (which was then called Hot Soul Singles) charts only includes 50 songs per week, as the chart was cut from 100 to 50 songs a few years ago.