In 1982, top 40 music was working its way through an identity crisis which started with the disco backlash three years earlier.  As the prevailing sound of rock music evolved, a lot of recording acts had their first hits, while many others had their last.  And, there were several acts which had their only hit during that time period.  One of those was the American-Canadian duo Chéri.

Chéri was a fairly short-lived group which was, for the most part, the brainchild of R&B/disco singer Geraldine Hunt.  A duo featuring Rosalind Hunt (Geraldine’s daughter) and Lyn Cullerier*, Chéri began singing in Montreal and fairly quickly issued a self-titled album in Canada.  In the US, the album was reworked and issued under the name of its first single, Murphy’s Law. 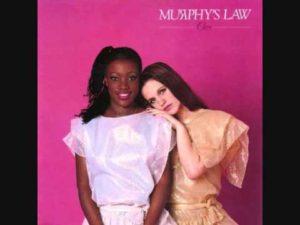 The single “Murphy’s Law” was co-written by Geraldine Hunt and produced by her and her son, Freddie James (Rosalind Hunt’s brother).  A story of, as might be guessed from the title, everything going wrong for the protagonist (who is taunted by his soon-to-be-ex-girlfriend throughout the song), “Murphy’s Law” features the gimmick, pretty much unique to 1981-1982, of squeaky, sped-up vocals.  And, as with other singles featuring that gimmick, it worked decently enough for Chéri.

“Murphy’s Law” spent 12 weeks on Billboard’s Hot 100 overall.  It entered the charts at #90 for the week ending April 10, 1982 (chart | magazine) and rose to #39 eight weeks later (chart | magazine).  It stayed at that spot for a second week before very quickly falling from there; within three weeks, it had fallen off the Hot 100 entirely.

It should be noted that the single had better success on other charts, particularly the disco chart, where it went all the way to #1.

Very quickly after the release of “Murphy’s Law”, Lyn Cullerier left the duo (some sources appear to say that she was forced out) and was replaced with another American, Amy Roslyn.  A second album followed, still mostly written and produced by Geraldine Hunt, but the follow-up failed to do much of anything.  Fairly quickly thereafter, Chéri apparently called it quits.

For as much as “Murphy’s Law” received airplay during its original chart run, it receives little to none now.  Fame was fleeting for Chéri, I suppose.  Got it all together, dontcha baby?

* The always-reliable Wikipedia refers to her as Lise Cullerier.