2016 has not been a good year, if you judge years based on how many pop superstars died.  The last week of December brought the news that George Michael died on Christmas Day.  Though it has been a while since Mr. Michael hit the charts, his music still gets a fair amount of airplay, continuing to introduce him to a whole new generation and thereby making it that much more of a shock for so many when they heard of his death.

Born Georgios Kyriacos Panayiotou in 1963, George Michael  met a schoolmate named Andrew Ridgeley and discovered that they were both interested in music, which eventually led to the formation of Wham! and, after that, to worldwide success.  However, it wasn’t long before it was clear that Mr. Michael was destined for a solo career.  The smash hit “Careless Whisper”, though credited to Wham! in the United States, was actually a solo hit for George Michael, and less than two years later, Wham! was officially no more.

George Michael’s first album, Faith, was phenominally successful, eventually becoming the biggest selling album of 1988 (even though it was released in 1987).  The controversy involving some radio stations refusing to play the album’s leadoff single, “I Want Your Sex”*, only generated more publicity and once again proved that any press is good press.  The title track did even better, becoming the number one single for all of 1988. 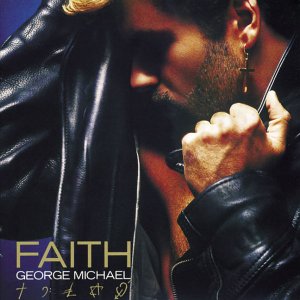 Among the many topics and musical styles present on Faith was what Mr. Michael’s official website** calls a “clattering drug abuse saga” with “funk” called “Monkey”.

The fifth single from Faith, actually, is fairly different from the album version.  Instead, “Monkey” got a 7″ version which was remixed by the very successful production team of Jimmy Jam and Terry Lewis.  (Songfacts reports that Mr. Michael brought Jam and Lewis in after hearing their work on Janet Jackson’s “Nasty”.)

Almost certainly bolstered by the performance of Faith‘s previous singles, “Monkey” entered Billboard’s Hot 100 all the way up at #42 the week ending July 9, 1988 (less than a week after its release date) and peaked at #1, where it spent two weeks, in its seventh week on the chart.  In all, it spent 16 weeks on the Hot 100 and sold well enough to be listed at #45 in Billboard’s Year End Hot 100 of 1988.

As stated at the top, some of George Michael’s music (especially “Careless Whisper”, “Faith”, and “Father Figure”) still gets a good deal of airplay on classic hits stations (and, yes, “I Want Your Sex” also still gets the occasional spin).  “Monkey”, however, appears to have disappeared from the radio landscape entirely.  You would think that a “Jack FM” or similar format could fit it in.

* The author can attest to this, as his hometown top 40 station temporarily considered not playing the track before letting their listeners vote on it.  The listeners voted to play it, and play it the station did.

** As of this writing (31 December 2016), Mr, Michael’s website has a lot of detail about his music but has yet to acknowledge his death.