Those of my readers who have a good memory of the early 80s may remember a group called Saga.  Originally called Pockets, this Canadian progressive rock band had several charting songs in their native country. The song for which they are probably most remembered, though, never charted in Canada.

Like The Kings, another Canadian one-hit wonder spotlighted on this blog somewhat recently, Saga has a quite functional website.  Unlike The Kings, however, Saga’s website does not include its own biography section, instead linking directly to the band’s page on the oft-maligned and not always accurate Wikipedia. 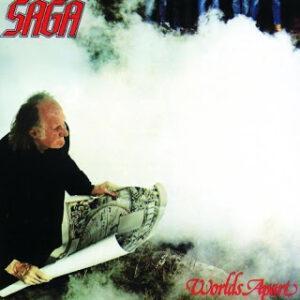 Though Worlds Apart was released in early 1981, “On the Loose” did not enter Billboard’s Hot 100 until it debuted at #86 for the week ending December 4, 1982 (chart | magazine).  Its climb up the charts was relatively slow next to a lot of the chart-toppers of the time; it finally peaked at #26 for the week ending February 26, 1983 (chart | magazine).  Its descent was much quicker, as it dropped off the Hot 100 in early April after a total of 18 weeks.  The band hit the charts twice more in 1983 before disappearing from the Hot 100 entirely.

Over 30 years later, Saga is still releasing albums, which continue to chart well not in Saga’s native Canada but in Germany, and they are still touring in Germany, Canada, and other places (and per the band’s website, selling out most of their venues), but they have become largely forgotten in American classic rock radio, though very occasionally “On the Loose” will get airplay to remind people of their desires to escape and break free.