The early 1970s, more than any other time during the rock era, was good for instrumental hits.  Several instrumentals made the top ten during that period, and no fewer than three of them (“Frankenstein”, “Love’s Theme”, and “TSOP (The Sound of Philadelphia”) went all the way to number one.  One of those who capitalized on the then-popularity of instrumental music was a British musician named Tom Parker, along with his band, Apollo 100. 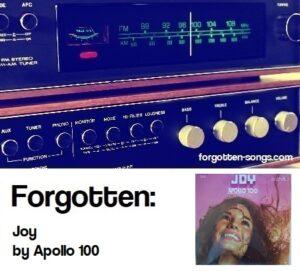 The beginnings of Apollo 100

Not to be confused with Colonel Tom Parker, Elvis’s manager, the Tom Parker about whom I am writing was proficient with multiple different instruments, starting with piano and incorporating several others.  A session musician, Mr. Parker had played with several bands in the years prior to forming Apollo 100 in 1972.

Things started off quite well for Apollo 100, with their first album, Joy, quickly hitting the charts. 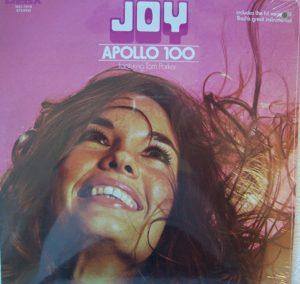 The single made its way up to the top ten, peaking at #6 for the week ending February 26, 1972 (chart | magazine).  After peaking, “Joy” hung in the top 20 for another three weeks before starting a precipitous decline which ended in a nosedive right off the chart from #52.  “Joy” spent 14 weeks in the Hot 100 altogether and ended the year as the #71 single.

“Joy” comprised pretty much all the success Apollo 100 was to have.  A follow-up single with the ever-so-catchy title “Mendelssohn’s 4th (Second Movement)” peaked at #94, and after that, Apollo 100 never hit the Hot 100 again, though the group did place a third song on the Adult Contemporary chart (which was called the Easy Listening chart at the time).

Today, from my observations, instrumental hits, for the most part, are completely absent from the playlists of classic rock or classic hits stations (except for a very small few, including the aforementioned “Frankenstein” and “TSOP”…I haven’t heard “Love’s Theme” on American terrestrial radio in a while).  “Joy”, while not having appeared much on radio in recent years*, has made its way into a few commercials here and there.  The commercials were nice, but it would be nice to hear this on the radio again.

* A version, mind you, that doesn’t even appear on Amazon.
** This is not to say that it doesn’t play at all…I know, for example, that WLNG on Long Island played it in the past 24 hours (as of this writing).  With that said, the last time I heard it on the radio was probably over 15 years ago.
Note: this post contains affiliate links. View my affiliate link disclaimer here.

It was 35 years ago today, if you can believe it, when the Chicago Bears Shufflin' Crew hit the Hot 100 with a song that should have hit the top 40. Check my post to find out why it didn't: ...

Here's one of those songs that I figure I should have heard on the radio back in 1979...but I have no memory of having heard it.Interestingly, this wasn't the only big hit by Barbra Streisand from that year to be basically forgotten by radio. ...

From what I have seen, sometimes a song becomes forgotten because of multiple reasons. Take, for example, an artist whose career has stretched six decades and counting, and add in the fact that the song in question was part of a short-lived foray into the world of disco, and you have the perfect rec...
View on Facebook
· Share

29 years ago, Stacy Earl peaked on Billboard's Hot 100 Airplay chart with her first hit from what would be her only album.I've mentioned it before - on Twitter if nowhere else - but this was the first "cassingle" I ever bought. My local top 40 station didn't even play this song, so I took the opportunity to grab it (though I had already recorded it off the radio off a top 40 station from about 100 miles away - I had a good antenna) at my local Walmart.That Walmart is gone, and this song is long gone from the airwaves. ...

There were a couple of years when the tide of pop music turned so completely that a lot of songs, and even a lot of artists, were eventually forgotten by both American radio and a good portion of the listening public. A lot of talented artists, with a fair number of big hits, were swept ... Continue...
View on Facebook
· Share

46 years ago this week, Polly Brown entered the Hot 100 with a very early disco hit, which would turn out to be her only hit in the US. Remember this one? ...

Sometimes a recording artist will find chart success early in his or her career and then, despite years, or even decades, of further recordings, will never reach the charts again. To add insult to injury, for some of those artists, their one and only hit is left behind by radio after its original ch...
View on Facebook
· Share

Two years ago today, Daryl "Captain" Dragon passed away at age 76. He and Toni Tennille were responsible for a lot of hits, mostly forgotten, in the mid-to-late 1970s, including the one linked here.Sadly, it was their divorce several years ago that got me to write this post, which is in serious need of cleanup. ...

I don’t know about anyone else, but I was disappointed to hear that Toni Tennille filed for divorce from Daryl “Captain” Dragon a couple of weeks ago. (And then I was further disappointed to see that most of the responses to this news was “they’re still alive???”) As a child of the 70s, ...
View on Facebook
· Share