It seems like an unlikely start for a band, but Quarterflash got its start when a couple of teaching students met and fell in love.  Marv and Rindy Ross were a good foundation for the bands in which they played; Marv played guitar, and Rindy sang and, for good measure, also played saxophone.  And so they formed a band and gave it a name few people would forget:  Seafood Mama. 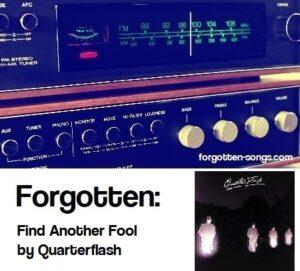 Thankfully, the name “Seafood Mama” didn’t last once that band and another band merged, and instead they settled on “Quarterflash”.  Quarterflash’s own bio page doesn’t explain the origin of the name, but this archived page at Classic Rock Revisited explains it:

The group’s producer had just returned from Australia and pulled out a book he brought back that listed Australian and New Zealand phrases. When the group came across the phrase Quarterflash, which Australians used to describe newcomers to their land as one-quarter flash and three-parts foolish, the search was over.

After getting a record deal, Quarterflash didn’t have to wait too long for its first taste of success, as its first single, a re-recorded version of a Seafood Mama song, “Harden My Heart”, shot right up to #3 on Billboard’s Hot 100.  The group’s eponymous debut album rode the success of “Harden My Heart”. 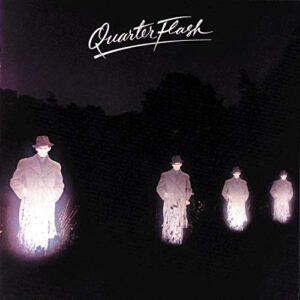 Ask most people about Quarterflash now, and they would probably tell you that the band’s story began and ended with “Harden My Heart”.  Except, of course, that it didn’t happen that way.

Quarterflash after “Find Another Fool”

Quarterflash continued to record for a few more years, even hitting the Top 20 one more time.  However, tastes were changing, and Quarterflash found diminishing returns on their albums.  The group broke up in 1985 after Geffen dropped them, though Marv and Rindy Ross, still married over 30 years later, have released new material in the 21st century under the Quarterflash name.  The Rosses can still be found playing the occasional venue, mostly in Oregon.

Of course, “Harden My Heart” still gets a good amount of airplay on radio today.  Unfortunately, radio has forgotten “Find Another Fool” completely.