In the late 1980s, hair bands (or glam metal, or whatever you want to call that type of music) were at the height of their popularity.  (The author here takes a moment to remember his now-departed grandfather greeting the image of, I believe, Twisted Sister on his television with “Look at them ugly girls!”)  Glam metal was all over the pop charts at the time, thereby making it the perfect time for a girl group called Vixen to make it big.  And I suppose they did that, ever so briefly.

The Two Hits of Vixen

Vixen’s eponymous first album, released in late 1988, should have (in my opinion, of course) been a bigger hit.  It spawned two top 40 hits, one of which, I just learned, was co-written by very popular (at the time) singer Richard Marx. 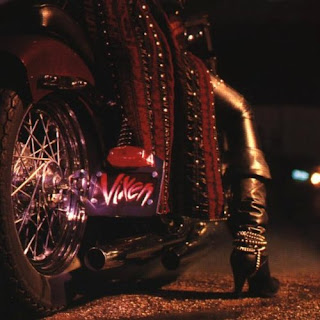 After the Top 40 Success

After that, the group only barely brushed the charts with one further song before breaking up in 1991 (though they have since re-formed).

An appearance by all four of the 1988-era members of Vixen on VH1 in 2004 led to EMI’s re-release of Vixen (and its followup, Rev It Up!), but this did not translate into renewed airplay for the group.  I think I may have heard “Edge of a Broken Heart” on the radio once in the 90s.  I definitely haven’t heard “Cryin'” on the radio since its top 40 run.

An interesting side note:  lead singer Janet Gardner and drummer Roxy Petrucci were both born on the same month, day, and year:  March 17, 1962.  Just a little tidbit of information about a group that is now mostly (unfairly) forgotten.