The Tubes are yet another group that most people would consider to be a one-hit wonder.  “She’s a Beauty” was their only hit, right?  Well, actually it wasn’t; the Tubes had several singles which charted, including a second top 40 hit.  It’s that other hit we’ll look at today, a single entitled “Don’t Want To Wait Anymore”. 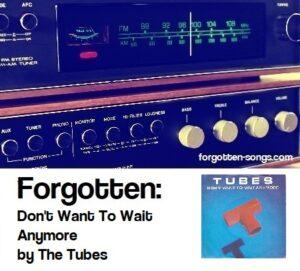 The Early Days of the Tubes

Prior to getting some amount of chart success, the Tubes were, well, an acquired taste.  Their stage shows were unique, and their early recordings leaned heavily toward satire.  While not getting mainstream attention, the Tubes definitely were a successful “cult” band.

Though their albums were charting fairly well in the 70s, it wasn’t until they signed with Capitol Records (after getting dumped by A&M) that the Tubes found some success on the singles chart.  Their having chosen to work with producer David Foster paid dividends with the release of their first Capitol album, The Completion Backward Principle.  Mr. Foster co-wrote several of the tracks on the album, which was their most successful to date. 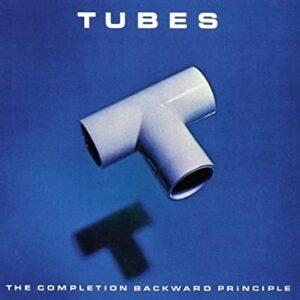 One of the tracks on which David Foster shares the writing credit was “Don’t Want To Wait Anymore”, a power ballad that might almost come across as wistful.  Might, that is, until one realizes that what our protagonist is waiting for.  (No points for guessing it.)  The listener is left to wonder whether he was still waiting at the end of the night.

The single also had success on the rock chart, peaking at #22 for the week ending September 12 (chart – Billboard Pros only | magazine), which happened to be the week it fell off the Hot 100.

The Tubes After “Don’t Wait To Wait Anymore”

The second single from The Completion Backward Principle turned out to be “Talk To Ya Later”, which had already had some success on the rock chart.   As “Don’t Want To Wait Anymore” was falling off the charts, “Talk To Ya Later” was rising up the rock charts a second time, this time buoyed by the brand-new MTV, which had just debuted on August 1.   It fell just short of the Hot 100, though, peaking at #101 on the Bubbling Under chart.

Of course, the next (and most successful) album, Outside Inside, yielded the group’s biggest hit by far, the top-ten (barely) “She’s a Beauty”.  The group continued after that, but that was the last time for them to enter the top 40.

As I mentioned, “She’s a Beauty” is the only hit by The Tubes that gets any airplay now on classic hits radio*, unless you count old rebroadcasts of the three American Top 40 episodes on which “Don’t Want To Wait Anymore” appears.

* I’m told that “Talk To Ya Later” gets some classic rock airplay, but apparently not enough that I’ve ever heard it on the radio.
Note: this post contains affiliate links. View my affiliate link disclaimer here.