Occasionally, a recording act will be remembered many years after hitting the charts, before finally disappearing from the radio waves.  Such was the case with Missing Persons, a group known best for two songs which both just missed the top 40.  Both those songs are mostly forgotten now, but one is remembered just a little bit less than the other.  It is for that reason that this entry will spotlight “Destination Unknown”. 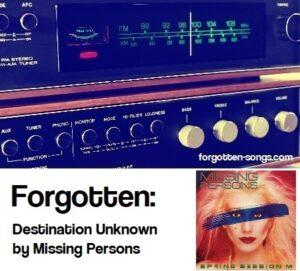 The Beginnings of Missing Persons

Not sure why this was the case, but the official website of Missing Persons starts the group’s biography with the somewhat inauspicious quote “(from Wikipedia)”.  Even weirder, the bio which follows does not match Wikipedia anyway.*  So, with that out of the way…

Originally formed in 1980 by Warren Cuccurullo and then-married couple Dale and Terry Bozzio (all of whom had worked with Frank Zappa), Missing Persons was a New Wave, synth-pop group.  The group’s music, along with the, um, provocative outfits that Dale Bozzio was wont to wear in their videos, made them popular on MTV in the early 80s.  (Allmusic described Ms. Bozzio’s look as “shocking-pink hair and sci-fi outfits capped off with Plexiglass bras”.**)

Once Missing Persons was signed to Capitol Records, their new label re-released a self-titled EP the group had previously recorded, with one notable exception.  Originally, the EP had included a cover of the Doors classic “Hello, I Love You”.  It was replaced on the Capitol re-release with a track called “Words”.***

The EP turned out to be a success, hitting #46 on the album chart, and so the group, now featuring a couple more members, quickly returned to the studio, turning out a full album entitled Spring Session M (which is an anagram of the band’s name).  Two songs from the EP, including “Words”, were included on the full album. 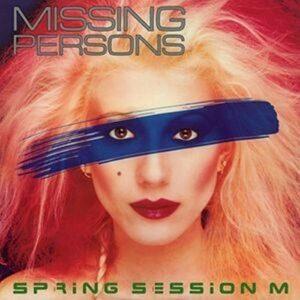 “Words” was the first single released from Spring Session M.  While getting a fair amount of airplay (again, especially on MTV), the debut single was unable to make it to the top 40, peaking at #42.

Following the failure of “Words” to hit the top 40, another single was released from Spring Session M, this one entitled “Destination Unknown”.  (This was the other song originally included on the EP.)  Written by Dale Bozzio, the song takes a philosophical look at life’s unknowns, particularly relating to the end of life.  (In doing so, it belies its rather happy pop sound.)  Said Ms. Bozzio, talking about the death of her brother some years later:

I wrote ‘Destination Unknown’ about this exact situation…knowing that someday I would pass away. It was just the way it was going to be. I wouldn’t have a chance to say ‘yes’ or ‘no.’

“Destination Unknown” entered Billboard’s Hot 100 just two weeks after “Words” had fallen out; it debuted at #85 for the week ending October 2, 1982 (chart | magazine).  Just like “Words”, the follow-up single was unable to crack the top 40.  It, too, peaked at #42 for the week ending November 27 (chart | magazine) and was therefore never announced by the venerable Casey Kasem.

The song did, however, perform better on the Mainstream Rock chart (or, as it was known then, Top Rock Tracks), peaking at #24 for the week ending December 25 (chart – Billboard Pros only | magazine).

Two other singles were released from Spring Session M after “Destination Unknown”; they, too, hit the Hot 100 but not the top 40.  One more charting hit would appear two years later, but that would be it.  Subsequent albums charted, though each charted lower than the previous one.  As the band’s webpage states, “Capitol was not happy about the direction the band was taking.”

Oh, and Terry and Dale Bozzio divorced, too.

By 1986, with everything that was going on, Missing Persons had broken up.  There have been a couple of reunions since then, though Terry Bozzio only took part in the first, mostly because it wasn’t completely comfortable to be working with his ex-wife.

For many years after the chart run of the two #42 hits by Missing Persons, both songs still received some number of spins on American radio.  “Destination Unknown” could occasionally be heard, but “Words” always received more airplay.  (Who of us doesn’t still remember “I think I’ll dye my hair blue”?)  Now, though, neither song appears to be heard much, if at all.  It’s probably been well over a decade since I heard any station play “Destination Unknown” now.

Life is so strange.

* To be fair, that page has been edited more than a few times. The pages probably matched at one time.
** Images of Ms. Bozzio’s look from that time are easily searchable and possibly not suitable for a G-rated blog read by the author’s mother.
*** For reasons I do not understand, the EP is not available for sale on Amazon, not even used.
Note: this post contains affiliate links. View my affiliate link disclaimer here.

30 years ago, Tara Kemp charted with her second (and final, as of this date) top 40 hit, a catchy dance tune that, admittedly, sounds a lot like her first one. ...

A few months before my last forgotten song honoree hit the charts, a California girl named Tara Kemp hit the top ten with two songs from her eponymous and only album. You probably remember the first one; do you remember a second hit? One that sounds...well...kinda a lot like the first one? Tara Kemp...
View on Facebook
· Share

There are a lot of "on this date" entries from this week that just can't get scheduled on this page. All of them do appear on my Twitter page, though. Check it out! ...

The latest Tweets from Forgotten Songs (@SongForgotten). Spotlighting songs that hit the Hot 100 back in the day, but which have become completely forgotten by radio now. Up and down the dial.
View on Facebook
· Share

24 years ago, Savage Garden peaked at #4 with its first hit...a hit that would be completely overshadowed by two hits to follow. ...

I Want You by Savage Garden - Unfairly Forgotten Songs

Occasionally, a band or artist will have a single which becomes a fairly good-sized hit but which becomes a forgotten song because of other songs the band/artist has released which completely overshadow the single in question. Even if a band is known for only a few songs, the huge hits can almost dr...
View on Facebook
· Share

35 years ago, Magazine 60 charted with a, well, rather strange dance song in which someone is trying to reach a literary character from the 1600s by phone. ...

During the post-disco years, a lot of synthpop bands popped up, many Europe-based. One such band was Magazine 60, a French band which is known in America–if it is known here at all–for exactly one song, “Don Quichotte (No Estan Aqui)”. “Don Quichotte”, you might have noticed, is the Fren...
View on Facebook
· Share

42 years ago this week, Ironhorse peaked at #36 with its only top 40 hit, a song that sounds quite a bit like another Randy Bachman composition. ...

It’s not uncommon for a band member to leave a successful group and form his (or her) own group. Sometimes those later groups are successful themselves, and sometimes they aren’t. In the group of those bands which were somewhat successful, but forgotten, is the group Ironhorse. Where did Ironhor...
View on Facebook
· Share