With the advent of April 2017 came yet another classic hits artist taken from us, as John “J.” Geils was found dead in his home at age 71 of what has been reported to be natural causes.  J. Geils, of course, was the namesake of what was called the J. Geils Blues Band before simply becoming the J. Geils Band in 1969.  (I suppose it was a catchier name for a band than its original name, Snoopy and the Sopwith Camels.) 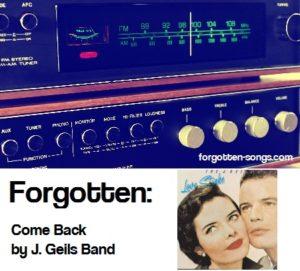 The Evolution of the J. Geils Band

Originally an acoustic blues trio, the band added members and instruments as it continued to develop.  Eventually, their definitive sound formed around electric guitar, bass, and organ, and the band began to chart on the singles and album charts.

1978 brought the J. Geils Band a new record label, EMI, and its first gold album in five years, Sanctuary.  Continuing to modify its sound for the changing music scene, the J. Geils Band released Love Stinks in January of 1980. 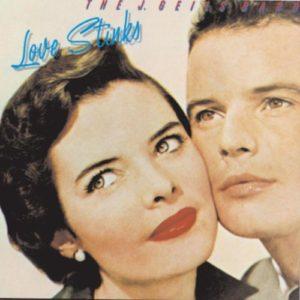 The first single released from Love Stinks was not its title track (though I would argue that “Love Stinks”, which turned out to be the second single, is probably the best remembered track) but a high-energy rocker called “Come Back”.  It was lyrically pretty simple:  the story of a jilted lover still carrying the torch for his ex.

Of course, the J. Geils Band went on to even bigger success with their next album, Freeze Frame, which went straight to #1 and spawned two Top Ten singles, one of which, “Centerfold”, was one of the top hits of the entire decade (per Billboard), spending six weeks at #1 in early 1982.  (The title track did not perform too shabbily either, peaking at #4.)

And then, just as quickly, it all came crashing down.  Vocalist Peter Wolf, on hearing that the group had refused to record some songs he had co-written (again, per Billboard), left the group in 1983 for a solo career that did not produce the sort of success that the J. Geils Band had found just a couple of years earlier.  The J. Geils Band itself continued after Mr. Wolf’s departure with one more album and the title track for the horror movie Fright Night before calling it quits in 1985.  Per The Mirror’s obituary, Mr. Geils spent several years afterward focusing not on music but on auto racing and restoration.

Since then, the band has reunited (including Peter Wolf) for a tour and several other concert dates.  The band, or someone connected with it, also took the time in the late 90s to create a webpage for the band. Unfortunately, the internet has a way of preserving all sorts of things that one might not want to see, including the band’s website, which has not been updated since the 20th century and which includes some three-second auto-playing clips.  The band’s Facebook page is a little more up to date, though it has not, as of this writing, included anything about the death of J. Geils.

Today, of course, the enormity of “Centerfold” has guaranteed its continued airplay, and “Freeze Frame” and “Love Stinks” still get the occasional spin.  I, however, do not believe I have ever heard “Come Back” on terrestrial radio, be it a classic hits or a classic rock station.  It would be a good song to add to either type of station.