Some pieces of entertainment are best known for the memes they inspire.  Such was the case for the 1984’s minor hit Breakin’.  Virtually no one remembers the sequel, but its subtitle has appeared all over the internet in recent years.  At this point, most people who have spent more than a few hours on the internet have seen a lousy sequel to something, be it a movie, a political debate, or virtually anything else, given the title “____ 2:  Electric Boogaloo”. Well, thank Breakin’ for that. But also thank Breakin’ for a little remembered Top 10 hit called “Breakin’…There’s No Stopping Us” by a duo called Ollie and Jerry. 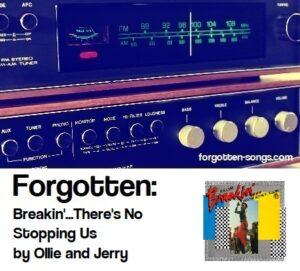 Ollie and Jerry:  From Raydio to Radio

Ollie and Jerry was the name of a short-lived recording duo consisting of bassist/vocalist Jerry Knight and drummer Ollie E. Brown, both of whom, among other things, worked with the group Raydio (the best known member of which was Ray Parker Jr.).  Mr. Knight was one of the founding members of Raydio and can be prominently heard on “Jack and Jill” (which still gets enough spins not to be eligible for this website). He left Raydio after its first album (called, fittingly enough, Raydio) for a solo career which saw a few songs hit the R&B chart. Mr. Brown, meanwhile was a session drummer who appeared on all Raydio’s albums.

Once Ollie and Jerry was formed, the duo was quickly signed to Polydor Records and recorded two tracks for the soundtrack (released by Polydor) to Breakin’, including the quasi-title track “Breakin’…There’s No Stopping Us” (which, if I remember correctly, had the movie’s title pasted onto the beginning of the track’s title for name recognition). 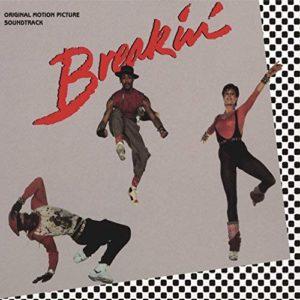 Almost a month after the release of Breakin’ to theaters, “Breakin’…There’s No Stopping Us” entered Billboard’s Hot 100 fairly strongly, coming in at #62 for the week ending June 2, 1984 (chart); it hit its peak of #9 almost exactly two months later (chart).  In all, it remained on the Hot 100 for 18 weeks, which was fairly decent for 1984 – decent enough for the song to rank #80 on Billboard’s Year-End Hot 100 Singles for 1984 (Wikipedia chart | Billboard 1984 Year-End issue).  It did hit #1 on the Dance/Disco chart and #3 on what was then called the Black Singles chart.

Following the success of “Breakin’…There’s No Stopping Us”, Ollie and Jerry also recorded “Electric Boogaloo”, which was, of course, basically the title track from Breakin’ 2.  However, though that single charted on the R&B and dance charts, it missed the Hot 100 entirely…and it isn’t even available as a digital download on Amazon at the time of this writing. The duo split shortly after that, having never recorded an entire album.

Following the split of Ollie and Jerry, Ollie E. Brown produced and/or performed on many albums for the next couple of decades but was in real estate by the start of this decade.  Jerry Knight, meanwhile, wrote and produced for many artists as well before dying at age 44 of cancer in 1996.

The Disappearance of the Song

And when was the last time I heard this track on an American terrestrial radio station?  Why, when I requested it, that’s when. Star 107.9 in Columbus*, one of the best of the 80s radio stations to hit the scene during that genre’s brief span as the Next Big Thing**, had an all-request lunch hour back around 1999, and even though I was over a thousand miles away, I happened to be listening to that station at the time, and they tracked the song down for me.  Unfortunately, the years since then have given us a lot of consolidation and a lot less all-request lunch hours or originality in general, and tracks like “Breakin’…There’s No Stopping Us” have fallen by the wayside in radio’s rush toward the same old bland mix found in every market now.

* A tribute site to that pioneering but long-gone station may be found here.
** The other big 80s station from that era would have to be WXXY in the Chicagoland area, which was much better known as “The 80s Channel”.
Note: this post contains affiliate links. View my affiliate link disclaimer here.