Most people who have heard of Charlie Daniels probably remember him mostly for The Charlie Daniels Band’s platinum-certified #3 smash “The Devil Went Down to Georgia”, which still gets a fair amount of airplay even today, and rightly so.  Some may also remember his #9 song from a few years before, “Uneasy Rider”, or they might even remember this ad from 2010:

Most people, though, probably don’t remember that The Charlie Daniels Band very nearly returned to the Top 10 just a year after “The Devil Went Down to Georgia” had its run and helped the album on which it appeared, Million Mile Reflections, go platinum as well.  The band’s follow-up album was entitled Full Moon and was released in the summer of 1980. 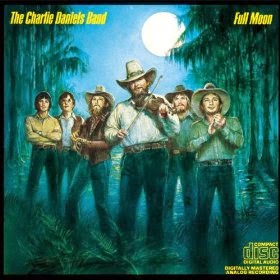 A few weeks before Full Moon dropped, the debut single, “In America”, was released.  The song was about restoring patriotism in the United States after a rather lousy decade (with an economy to match) and while the Iran hostage crisis was still ongoing.  It spoke of Americans becoming united, and after all this, “God bless America again”.  The hope, optimism, and patriotism of the song resonated with many people.

“In America” debuted in Billboard’s Hot 100 at #82 in its May 31, 1980 issue (chart) and peaked at #11 the week ending August 2 (chart | magazine); it remained at that position for two weeks and then went into a freefall, falling out of the Top 40 within three weeks of peaking (by which time the second single from Full Moon, “The Legend of Wooley Swamp” had already begun its chart run) and out of the Hot 100 completely just two weeks later.  “In America” spent a respectable 15 weeks on the Hot 100, and it did well enough to land at #96 in the year-end chart for 1980.

According to Wikipedia (at least as of this writing), “In America” experienced a short revival in 2001 after the events of September 11; however, since that time I know of no station that has played the song except WCBS-FM, in a 2008 Sunday night broadcast of their Top 20 from August 3, 1980.