Bonnie Raitt is one of those rockers who was around for years before ever having a top 40 hit.  She started recording in the early 1970s and even got a shoutout from Dr. Johnny Fever on “WKRP in Cincinnati” when he played her late 70s remake of “Runaway”, which got up to #57.  But it wasn’t until the early 90s that she ever hit the top 40 charts.  She hit first with “Have a Heart”, but she is probably best known for “Something to Talk About”, which hit #5 on Billboard’s Hot 100 in 1991.  “Something to Talk About” still gets some airplay on radio these days, and deservedly so, usually on adult contemporary stations. 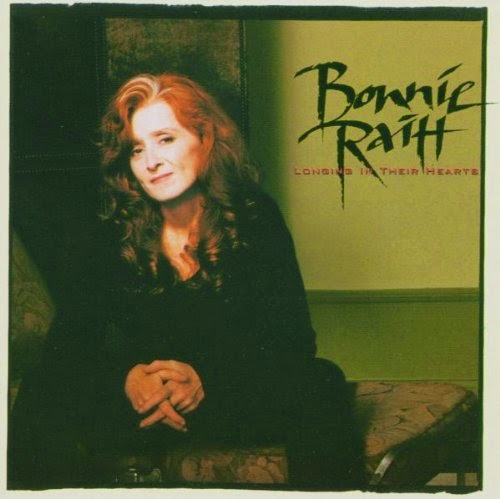 (Longing in Their Hearts, as might be expected, peaked at #1 on the Billboard 200. Album ℗1994 Capitol Records. Photo courtesy Amazon.com.)

“Love Sneakin’ Up On You” debuted on Billboard’s Hot 100 the week ending March 12, 1994 (chart) at #90, and I personally heard the song for the first time that same week on a Spring Break quasi-roadtrip.  It slowly made its way up the charts, peaking at #19 almost two months later, as seen in the issue for the week ending May 7 (chart | magazine).  The song had fairly good staying power, staying on the Hot 100 for 20 weeks and ending up at #94 for the year.  It did even better on the Canadian charts, where it was a #1 song.

After its run, there was one more single to be released from Longing in Their Hearts.  Unfortunately, “You” was not nearly as successful, peaking at #92.  After that, Ms. Raitt hit the Hot 100 a couple more times before basically moving solely to the adult contemporary chart, which she last hit in 2006.

“Love Sneakin’ Up On You”, though, has seemingly disappeared.  ()  It would be nice to see it reappear on the airwaves sometime.

NEW POST: Despite her massive successes on the charts back in the day, Olivia Newton-John had a lot of songs which have been forgotten by radio, including the less successful of two top 40 hits from her last big-budget movie. ... See MoreSee Less

"Livin' in Desperate Times", from Olivia Newton-John's last big-budget movie, has become one of her most forgotten top 40 hits.
View on Facebook
· Share