Unlike the last two honorees on this blog, Van Halen is far from a one-hit wonder.  I wouldn’t even have thought to include them on a forgotten songs blog, since most of their hits still get airplay on rock/classic rock stations throughout the country.  I can name at least ten songs of theirs that still get airplay, and so, most likely, can you.  And then there are other songs that I heard back in the day that get no airplay that I know of now, but as it turns out, none of them made the Hot 100 (which, by and large, is one of my big qualifiers for this blog these days).

END_OF_DOCUMENT_TOKEN_TO_BE_REPLACED

Midnight Oil, like Baltimora, is seen in the US as a one-hit wonder.  Unlike Baltimora’s one hit, however, Midnight Oil’s “Beds Are Burning” still receives a fair amount of airplay, at least in the parts where I live.  This is not the case for what was seen by some (such as, for example, myself) as Midnight Oil’s second biggest hit.  Sure, at the time, “Blue Sky Mine” received a lot of spins (in the market where I lived at the time, almost all of them were on the alternative station–yes, there were alternative stations in 1990), but since its original run, it has pretty much disappeared.

Interestingly enough, the album from which “Blue Sky Mine” originated, Blue Sky Mining, actually charted higher on the Billboard 200 than Diesel and Dust, from which “Beds Are Burning” came. 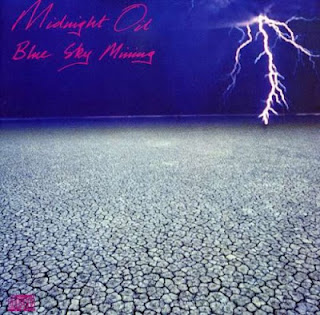 “Blue Sky Mine”, like “Beds Are Burning”, was a song with a message.  Whereas “Beds Are Burning” spoke about giving native lands back to indigenous Australians (specifically the Pintupi), “Blue Sky Mine” speaks about workers who are basically treated as a secondary (or tertiary, or worse) concern after profit, in this case through the real history of blue asbestos mining in Wittenoom, Western Australia.  Asbestos, as many people know, can cause all sorts of diseases or other health problems, particularly for miners who are breathing it all the time with little to no respite.  As commenter “jlc01” at songmeanings.net relates:

It wasn’t until 20 years later that the CSR actually built vents so that miners could breathe fresh air.

CSR, the owner, was referred to in the song as the “sugar refining company” owing to its original name, which was the Colonial Sugar Refining company.  It should be noted that in recent years CSR has paid out a lot of money to people affected by the Wittenoom disaster, but it appears, from what I have read, that they have done so very unwillingly.  As for the mine itself, it closed in 1966, with residents being encouraged to leave over the next few years owing to the general contamination of the area.  Wittenoom itself is no longer even recognized as an official town and has been removed from road maps.  Truly a sad episode of history.

And as for the song, “Blue Sky Mine” hit Billboard’s Hot 100 in early 1990, debuting at #77 for the week ending February 17 (chart), peaking at #47 (which means that we never got to hear Shadoe Stevens announcing it) for the week ending March 24 (chart), and remaining on the chart for ten weeks.  I would classify this as a song which should have been a bigger hit.