The name Jamie Walters probably is not familiar to people who either did not watch Fox or listen to top 40 radio in the early 90s.  And, even if you did listen to top 40 radio in the early 90s, you might have missed Mr. Walters.  After all, his first, and biggest, hit wasn’t even released under his name, but, instead, under the name of the Fox television program on which Mr. Walters had a starring role, The Heights.  (Ironically, the show was cancelled the week after “How Do You Talk to an Angel”, its theme, fell out of the number one position.)

END_OF_DOCUMENT_TOKEN_TO_BE_REPLACED

To most people, Meco is known for one song, and one song only:  the only instrumental single ever certified platinum by the RIAA, “Star Wars Theme/Cantina Band”.  What many probably don’t know is that the single was just 3½ minutes of a 16-minute magnum opus.  I can’t link the MP3 for that because it is an album-only track, so check out The Best of Meco, which contains that track, here.

As you will see if you do check out The Best of Meco, Meco Monardo had an affinity for making discofied versions of many movies, mostly sci-fi ones, with varying degrees of success.  So, when the sequel to Star Wars came out in 1980, Meco was there, and he was ready. 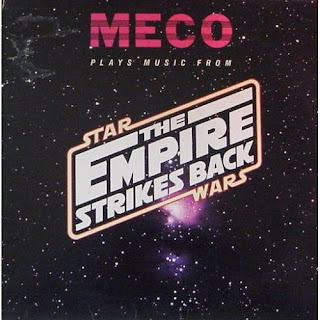 “The Empire Strikes Back (Medley)”, like its counterpart from Star Wars, combined multiple themes from John Williams’s score from the movie.  In this case, “The Imperial March (Darth Vader’s Theme)” seamlessly transitions into “Yoda’s Theme” before ending with the slightest hint of Darth Vader’s labored breathing.

Unlike its counterpart, this movie’s medley did not shoot straight to #1, peaking instead at #18 for two straight weeks starting on August 9, 1980 (chart | magazine), possibly due to the disco backlash that had happened in the year before The Empire Strikes Back hit cinemas.  It spent a respectable, but not remarkable, 14 weeks on the Hot 100.

Afterward, Meco would hit the Hot 100 a few more times, but none of his later songs would fare as well as “The Empire Strikes Back (Medley)”.  And since then, only his most famous single would see airplay anywhere, though others, like this one, appear deserving of a few more spins, at least.