When people think of the Pointer Sisters, I would imagine there are a few songs that come quickly to mind:  “I’m So Excited” (not this version, though), “He’s So Shy”, “Fire”, and that pinball song from “Sesame Street” come to mind quickly for me.

“American Music” was on the same album, So Excited!, as “I’m So Excited” (though that song was added to later releases of their next album, Break Out and re-released as a single in 1984). 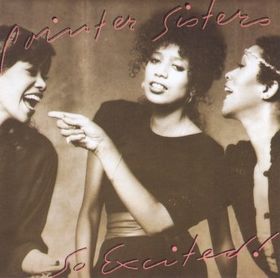 (So Excited! peaked at #59 on the Billboard 200.  Album ℗1982 Planet Records.  Photo courtesy Wikipedia under Fair Use clause.)

I have heard this song on the radio exactly once since it was on the charts in 1982, and that was sometime around 2002 when my city of residence had an 80s station, and that station was airing what was then called “AT40 Flashback” programs.  I’ve never heard it on the radio since.

Of course, the Pointer Sisters went on to much bigger successes with their aforementioned next album, which spawned several top 10 hits and went 3x platinum.

Just after Regina’s one big hit, “Baby Love”, made its way up both the Hot 100 and Hot Dance/Disco charts in 1986, Stacey Swain, better known as Stacey Q, followed with her one big hit, “Two of Hearts”, the debut single from her first album for Atlantic Records, Better Than Heaven.