Since the last entry referenced a Madonna song, perhaps it is fitting that the song highlighted in this entry was intended for Madonna.  This was written in 1986 by a lady named Regina Richards, who was convinced by her record company (Atlantic Records) to record it for herself. 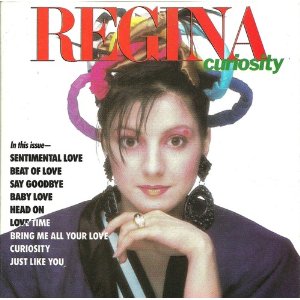 And so Ms. Richards went along with Atlantic’s suggestion and recorded “Baby Love”, along with an entire album called Curiosity.  The song was a big success, getting a lot of airplay then (though, per the rather incomplete listings at the now-defunct yes.com, it received no airplay at all on any reporting station in the US in the week prior to my writing this).  It entered Billboard’s Hot 100 at #88 for the week ending June 21, 1986 (chart | magazine) and finally peaked at #10 for the week ending September 13 (chart | magazine).  The song stayed on the Hot 100 for 20 weeks.  It also hit #1 on what was then called the Hot Dance/Disco chart and stayed there for two weeks. Billboard ranked it the 85th biggest hit of 1986.

For some reason, despite the popularity of this hit, Regina never had another hit.  In the meantime, the always-reliable Wikipedia says that she is married with four kids and now lives in my former home of Austin.

For whatever reason, the MP3 of “Baby Love” is not available on Amazon.  You can still buy the entire album here: